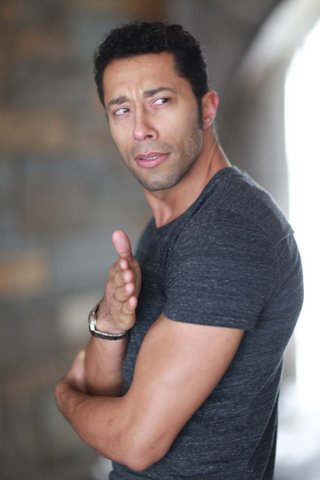 Born, raised, and seasoned in New York City, William DeMeritt knew he wanted to be a performer from a very early age.

The son of a jazz guitarist, the young William spent many wee-small hours perched atop a bar in Harlem listening to his father play, while occasionally being serenaded by the intimidatingly sultry lead vocalist.

His ﬁrst acting experience came at the elementary level at New York’s prestigious Ethical Culture Fieldston School, where he played Benjamin Franklin in the third grade play. (At least he thinks it was third grade. It was a long time ago.) He went on to win acclaim for other stellar grade-school performances, such as “an Indian” in Peter Pan and ” Zeus” in a play his fifth grade class wrote about the pantheon of Greek gods.

But it wasn’t until high school that it ﬁnally dawned on him that acting was something he could do seriously and with purpose. The ﬁrst role for which he ever auditioned was that of “Greta” in Martin Sherman’s Holocaust drama Bent. He won the role, playing a Drag Queen at the age of seventeen. Sadly, he could never really learn how to walk in the stiletto heels. He went on to be featured in several other productions in his remaining high school years, with Trigorin in The Seagull and Banquo in Macbeth among his favorites.

William then enrolled at Marymount Manhattan College to pursue a BFA in acting, and it was there that he discovered his love of classical theatre, Shakespeare in particular. While at Marymount, he had the opportunity to perform in plays by Shakespeare, Aphra Behn, Athol Fugard, and Tony Kushner among others. He spent the ﬁrst semester of his senior year training at BADA in London, which culminated with his portrayal of Horatio in Hamlet.

Immediately following graduation, William was fortunate enough to work with Obie Award-winning director Liz Swados on The Violence Project. It was a musical created by Swados and the ensemble, and it dealt with America’s growing epidemic of violence, particularly focusing on the effect that violence had on children. The production went on to perform at schools throughout the New York City area, the New York Stage & Film Festival and NYC’s legendary experimental theatre LaMaMa ETC.

He continued to train while living and working as an actor in NYC, where he studied with theater legend Wynn Handman, tried his hand at stand-up comedy, and was part of the improvised poetry competition, The Slam Jam (created by Jarret Berenstein) at The Upright Citizen’s Brigade Theatre.  As his experience grew, William would be afforded a wide variety of performance opportunities, including The NY International Fringe Festival, The NY Stage & Film Festival, The Shakespeare Theatre of New Jersey, as well as his first television appearances in Guiding Light, One Life to Live, Law & Order: SVU, and several voice-overs and commercials.

Wishing to develop his skills even further, William enrolled at the Yale School of Drama. At Yale, William studied under some of the best theater professionals and teachers working today, including Ron Van Lieu, Christopher Bayes, and Robert Woodruff, and he performed classic roles, such as Richard III in Shakespeare’s Henry VI cycle, Brutus in Julius Caesar, and Lucius in Titus Andronicus.  Less traditional roles, like the title role in Yiddish King Lear, will forever hold a special place in his heart and memory.

Having graduated Yale in the summer of 2012, William now spends the bulk of his time in NYC, where he learns the ﬁner art of improv at The Magnet Theatre, teaches dialects, accents, and audition technique, and of course, pursues his own performing and writing endeavors.

In the summer of 2013, along with eleven other Yale School of Drama alumni, William helped to found OldSoundRoom performance ensemble (OSR). OSR continues to grow, learn, and to challenge, both themselves and audiences.

In May of 2014, William made his feature film debut in HBO’s Emmy-Winning The Normal Heart, based on the Tony Award-Winning play by Larry Kramer.